Showing posts from August, 2012
Show all
August 18, 2012
With BULLET RAIN now available (see previous post) I've now turned my attention to something that I've been blogging about for a couple of years now and have never gotten off the ground until now. I've written about a fantasy idea that I've had and have posted snippets that I've been working on this or that but nothing has ever been announced about it coming out in print. There was a good reason for that: it was never really finished. I'd made several stabs at it with the results never being quite what I wanted. It got to the point that I called my publisher and vented for awhile until he came up with a new concept for me, one that might fit what I really wanted to write. So, that being said, THE EASTLANDER CHRONICLES was conceived. It will consist of several parts--short novellas, all with a common thread, released one by one as they get written and edited. Part One is called WINTERTOME. It is finished aside from some final edits and I'm working on Part
Post a Comment
Read more
August 04, 2012 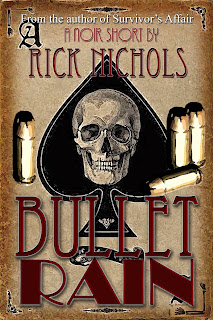 Hey gang! It's been a long time in coming but it's finally done. BULLET RAIN is here! Available in Ebook form, this short story concerns a mysterious hitman, a gangster's girlfriend, and a load of missing cash! Here is a link: https://www.smashwords.com/books/view/212016 Available in all Ebook formats including Kindle! Just .99! Check it out, and thanks in advance!
Post a Comment
Read more
More posts