Showing posts from November, 2012
Show all

November 18, 2012
Seven Realms Publishing, the publisher of my John Logan novels has reduced all my Ebooks (okay, all the Ebooks in their catalogue) to 2.99 through the holidays. So if you haven't gotten a John Logan Ebook yet now would be a great time to do it. Or get it for that reader on your list. Thanks!
Post a Comment
Read more
November 16, 2012 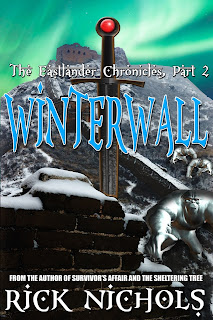 COMING SOON ﻿ WINTERWALL PART II of the EASTLANDER CHRONICLES Cain, the Eastland Blademaster, finds himself stranded along Grayrock's northern Wall, a barrier that protects Grayrock from the barbaric tribes in the north just beyond the mountains. But trouble is brewing. The tribes are leaving their lands to travel over the mountains and raid along the Wall. In addition, Nyogi, the Eastland assassin who Cain pursues, has hired skilled Talon assassins to find the Blademaster and kill him. Riding alongside battled-hardened veterans and scared new recruits, Cain must help defend the Wall in the face of a fierce winter storm.  When Jessup, Lord of Grayrock, arrives for a inspection before winter, the stakes get higher with the discovery that there is something more dreaded in the snow than a barbaric tribe, something from Ancient times and it has returned, hungry for the taste of men.﻿
Post a Comment
Read more

November 11, 2012
Want to salute my fellow veterans on this Veterans Day! And a special salute to those not here, for those who rest in the fields of Normandy, North Africa, Arlington, and countless cemeteries around the country and the world. Thank you.
21 comments
Read more
More posts