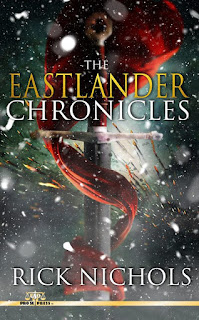 Rick Nichols, creator of the enigmatic John Logan featured ...in a series of thrillers from Pro Se Productions, brings to life another character from his fervent imagination. Harkening back to a wilder world and when justice was meted out by the blade, Nichols and Pro Se Productions proudly announce the release of THE EASTLANDER CHRONICLES.

Civil war is brewing in the Korrin Empire. The noble houses are sharpening their swords and preparing armies. Into this land comes a stranger with a black sword, as dark and mysterious as the land from which he hails. On a mission of revenge, the Blademaster known as Cain finds himself in a strange land where the women are beautiful and the enemies just as deadly.

THE EASTLANDER CHRONICLES contains three digest novels of the adventures of Cain as he battles with barbarian raiders, soldiers, creatures of the frozen wastes, assassins, thieves, a beautiful sword-for-hire whose charms may be too much for the warrior to resist, and an old enemy whose trail of betrayal and death is only beginning.

With an atmospheric cover and logo design by Kent Holloway and print formatting by Marzia Marina and Antonino Lo Iacono, THE EASTLANDER CHRONICLES is available now at Amazon at https://www.amazon.com/Eastlander-Chronicles-…/…/ref=sr_1_3… Pro Se’s own store at www.prose-press.com for 18.00.

This three digest novel collection is also available as an Ebook, designed and formatted by Lo Iacono and Marina for only $2.99 for the Kindle at https://www.amazon.com/Eastlander-Chronicles-…/…/ref=sr_1_2… and for most digital formats via Smashwords at https://www.smashwords.com/books/view/724556.

September 05, 2016
Hey everyone. Happy Labor Day to you and I hope it was a relaxing time. It was for me...I had to deal with living in Florida and a Hurricane that came through. Although the brunt of it missed my city, we had to deal with rain and some wind and it made for a rainy wet holiday. Where do you get your ideas? I get that question a lot and my answer is always the same: I have no idea. It just happens. Sometimes I play a what if...what if Logan did this or what if he had a client who did this and then see if there is a story in there to be mined. That's what writing is. It's taking that idea and digging into it, mining the details and nuances out of it; fleshing the characters out until they come alive to you and live in that world and on the page. It's a great feeling when you do that. As I write this the house is quiet. My wife has been quite busy with work lately and has another long day tomorrow so she is in bed early. My son's dog is spending the night with us a
Read more
September 28, 2019
Well, here I go again, apologizing for several months of nothing. I guess the only excuse I have is that there's been nothing really going on. I am writing (a new Logan project, among other things) and I'm working to get my manuscripts to the early Logan books so that I can re-release them I've done Survivor's Affair, and am working on getting the words to The Affairs of Men. I have a HUGE learning curve when it comes to doing this myself. I'm not a really techno person when it comes to this and my friend Kent Holloway has been a great help to me but I have a long way to go but I persevere. Enjoy my books? Want to say hi? I would love to hear from you. Click on the CONTACT ME tab and use one of those ways. I also want to try and be more frequent on here. Thanks for your support. Rick
Read more