THE EASTLANDER CHRONICLES, INCLUDING PT III, THE HOUNDS OF WINTER, WILL SOON BE RELEASED AS A ONE VOLUME SET BY ProSe PUBLISHING! 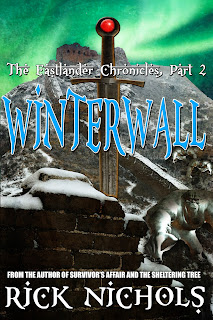 The second part of the Eastlander saga kicks off on a desolate wintry garrison where soldiers from the dukedom of Grayrock stand watch against the barbarian Qy who live just across the icy mountains. Cain is there just for warmth and a meal. Forced to extend his stay due to an impeding storm, the Eastland Blademaster will be asked to help the soldiers in their duty. His acceptance will put Cain in the midst of a brutal fight against the barbaric Qy and against an ancient evil who has awakened in the bitter cold--an evil who craves the taste of men.
AMAZON: http://www.amazon.com/Winterwall-Part-II-Eastlander-Chronicles-ebook/dp/B00AL0PFEU/ref=sr_1_1?ie=UTF8&qid=1355185141&sr=8-1&keywords=WINTERWALL 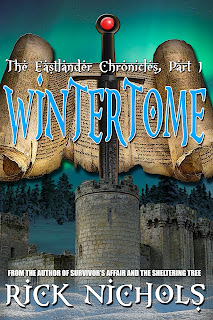 From the East he came, a warrior wielding a black sword on a quest that he alone must bear. He arrives on the shores of Karthia, a seaport city at the edge of a vast Empire that is slowly sinking into the pit of civil war. Short of coin, Cain agrees to take on the task of retrieving a scroll known as Wintertome, a scroll containing dark magic that if it falls into the hands of the shadowy mage who seeks it, will bring eternal winter and darkness upon the land. With the help of new friends Kalil, a thief, and Cortlyn, a beautiful but deadly mercenary, Cain must break into a fortress to get the scroll--and live long enough to get it to safety. All the while the warrior is aware of his true mission and the deadly killer whom he seeks. 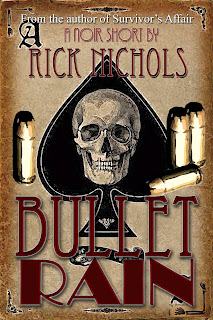 Mallory is not your typical mob hitman. He belongs to a special club of men the mob uses for especially difficult assignments. When he's asked to take out a boss, he didn't plan on having the boss' girlfriend tag along afterward. But when another boss shows up and starts gunning for him, Mallory knows he has a problem. Half a million dollars is missing and that could buy Mallory a lot of trouble. ﻿
﻿
Here's the link to buy: https://www.smashwords.com/books/view/212016

"My wife made a crucial difference during those two years I spent teaching at Hampden (and washing sheets at New Franklin Laundry during the summer vacation). If she had suggested that the time I spent writing stories...was wasted time, I think a lot of the heart would have gone out of me. Tabby never voiced a single doubt, however. Her support was a constant, one of the few good things I could take as a given. And whenever I see a first novel dedicated to a wife (or husband), I smile and think there's someone who knows. Writing is a lonely job. Having someone who believes in you makes a lot of difference. They don't have to make speeches. Just believing is usually enough."--Stephen King, On Writing Amen, Mr. King. My wife, Lisa, is a CNA specializing in home health care. She deals with sick people, dying people, paralyzed people. During the years that I was trying to put a sentence together she never discouraged me, never said that maybe I needed to take up un
Read more

Hey everyone. Happy Labor Day to you and I hope it was a relaxing time. It was for me...I had to deal with living in Florida and a Hurricane that came through. Although the brunt of it missed my city, we had to deal with rain and some wind and it made for a rainy wet holiday. Where do you get your ideas? I get that question a lot and my answer is always the same: I have no idea. It just happens. Sometimes I play a what if...what if Logan did this or what if he had a client who did this and then see if there is a story in there to be mined. That's what writing is. It's taking that idea and digging into it, mining the details and nuances out of it; fleshing the characters out until they come alive to you and live in that world and on the page. It's a great feeling when you do that. As I write this the house is quiet. My wife has been quite busy with work lately and has another long day tomorrow so she is in bed early. My son's dog is spending the night with us a
Read more

Want to salute my fellow veterans on this Veterans Day! And a special salute to those not here, for those who rest in the fields of Normandy, North Africa, Arlington, and countless cemeteries around the country and the world. Thank you.
Read more