Well it's here. The Affairs of Men has been rereleased with a new cover. 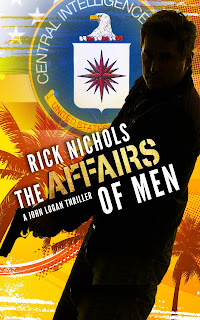 SURVIVOR'S AFFAIR HAS BEEN RE-RELEASED!

With a new cover by Kent Holloway and freshly edited, the book that introduced the world to John Logan is here.

For the past few years, you could only buy the first four books in the series in an anthology. I've heard your requests and so am releasing the books separately over the coming months. 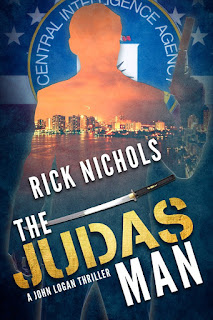 Finding a dead man on his houseboat was not what John Logan needed. Logan just wants to know why Teri's suddenly not returning his calls. The last thing he wanted was to come home to a murder.
The dead man on Logan's houseboat leaves few clues to who he was or why he was there. Who killed him and why? And why are people suddenly after Logan? Add an enthusiastic reporter snooping around asking dangerous questions and things could get deadly.
The investigation will bring Logan back to the one place he'd swore he'd left for good and reveal secrets his former bosses don't want known. 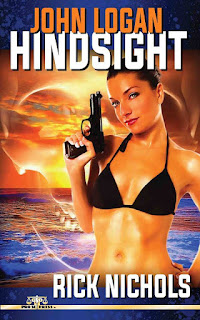 Five years ago Janine Tolley died of what the cops said was a drug overdose. her daughter Madisyn doesn't believe it and wants John Logan to find the truth. What John Logan thought would be a quick case turns into a twisted tale of love spurned, greed, bad business, and a man who wants to be governor.

The case will put Logan at odds with the men who speak for the dead as well as the man who leads them, Lt. Jake Ross.

JOHN LOGAN: FOUR IN THE CHAMBER
The first 4 John Logan novels in one edition. Newly created by ProSe Press, it's the best buy on getting started on the series!﻿
http://www.amazon.com/John-Logan-Chamber-Rick-Nichols/dp/1502996707/ref=sr_1_1?s=books&ie=UTF8&qid=1429462588&sr=1-1&keywords=John+Logan+Four+in+the+chamber 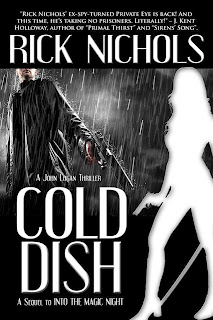 With his home in ruins, his lover in a coma, and his best friend missing, John Logan finds himself injured, alone, and fighting to protect an innocent witness while he works to uncover the truth behind the bombing that has shaken his world. His search will uncover an old familiar killer, a man whose money and power seems endless. It will take all of Logan’s skill and determination to survive. For how does someone who has nothing fight a man who has everything?

INTO THE MAGIC NIGHT 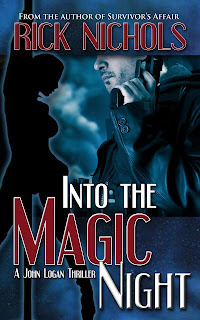 When a beautiful exotic dancer asks John Logan for help he is all too willing to help. But she's scared and before she can meet with Logan to tell him her problem, she's dead and Logan is left with more questions than answers. Who was she and why was she so scared? His digging will put Logan into the seedier side of Coral Bay and get him involved with a ruthless businessman, a venture capitalist, and could put him at odds with one of Logan's dearest friends.

Mason Killian lies in critical condition, the victim of a drive by hit. With his best friend fighting for his life, John Logan is determined to unravel who is responsible.
The shooting raises more questions than answers. Why is Killian using an assumed name? Why is he living as a ghost, with no bank account or place of residence?

Logan realizes that in spite of the years, he knows little about Killian for the former Special Forces sergeant has always been enigmatic about his personal life.

To find justice for his friend, Logan must do the unthinkable: he must dig into Killian's life and open things that Killian has kept forever closed.  What he finds will lead Logan into a web of deceit, betrayal, and murder, and could jeopardize his friendship with the man who has been his brother in arms for twenty years.

THE AFFAIRS OF MEN

Private Investigator John Logan has always been haunted by the tragic mission years before that took the lives of his black-ops team. But when he sees one of his former teammates alive in downtown Coral Bay, with a luscious woman by his side, and a horde of Russian hit men on his tail…Logan realizes that there was more to the ill-fated mission than he originally believed.

Driven by the need to search for his missing friend, his investigation is sidetracked when a beautiful architect asks him to look into her spouse’s suspicious activities. In spite of his rule against doing domestic cases, Logan agrees and uncovers far more than he could have ever suspected as both cases begin to intertwine. With the beautiful and tough Teri Johnson, and enigmatic Mason Killian by his side, Logan peels back the layers of a lethal plan that could have deadly consequences for the people of Coral Bay. As the danger rises, Logan will be forced to visit those places he had sworn off forever, dark shadows of his heart not seen since the death of his beloved Shikira

"In the second of his John Logan thriller series, author Rick Nichols does not disappoint.  With an almost seamless transition from his debut Logan thriller, “Survivor’s Affair”, “The Affairs of Men” takes the reader through an action packed intrigue that brings the main character and his companions face to face with ghosts from John Logan’s past."

THE BOOK THAT STARTED IT ALL!

John Logan has left his life in the intelligence community behind, eking out a meager living as a private investigator and trying to stay off the espionage radar.

But keeping a low profile proves harder than he thought when Coral Bay's millionaire Golden Boy ends up on the wrong side of a Samurai sword and his former mentor's wayward daughter the number one suspect. Finding himself honor bound, Logan is forced to join the hunt for the real killer.

But when the body count quickly rises and the danger begins to spiral closer to home, he calls on two former colleagues for help. What they uncover will have Logan questioning everything he's ever believed.

"My wife made a crucial difference during those two years I spent teaching at Hampden (and washing sheets at New Franklin Laundry during the summer vacation). If she had suggested that the time I spent writing stories...was wasted time, I think a lot of the heart would have gone out of me. Tabby never voiced a single doubt, however. Her support was a constant, one of the few good things I could take as a given. And whenever I see a first novel dedicated to a wife (or husband), I smile and think there's someone who knows. Writing is a lonely job. Having someone who believes in you makes a lot of difference. They don't have to make speeches. Just believing is usually enough."--Stephen King, On Writing Amen, Mr. King. My wife, Lisa, is a CNA specializing in home health care. She deals with sick people, dying people, paralyzed people. During the years that I was trying to put a sentence together she never discouraged me, never said that maybe I needed to take up un
Read more

Hey everyone. Happy Labor Day to you and I hope it was a relaxing time. It was for me...I had to deal with living in Florida and a Hurricane that came through. Although the brunt of it missed my city, we had to deal with rain and some wind and it made for a rainy wet holiday. Where do you get your ideas? I get that question a lot and my answer is always the same: I have no idea. It just happens. Sometimes I play a what if...what if Logan did this or what if he had a client who did this and then see if there is a story in there to be mined. That's what writing is. It's taking that idea and digging into it, mining the details and nuances out of it; fleshing the characters out until they come alive to you and live in that world and on the page. It's a great feeling when you do that. As I write this the house is quiet. My wife has been quite busy with work lately and has another long day tomorrow so she is in bed early. My son's dog is spending the night with us a
Read more

Want to salute my fellow veterans on this Veterans Day! And a special salute to those not here, for those who rest in the fields of Normandy, North Africa, Arlington, and countless cemeteries around the country and the world. Thank you.
Read more